Finding Happiness on a Budget

How to Attract Middle-Income Older Adults to a 55+ Community

These days it seems many in the business of developing and operating senior living communities are focused on one of two booming segments: the vast underserved “middle market” and the active adult, or 55+, sector. Generally regarded as two distinct product categories, they both face a similar challenge in persuading older adults to get off the sidelines, so to speak, and into the seniors housing arena. Active adult is the “front door” to the eldercare continuum, so making it accessible to the greatest number of older adults, including those of limited means, makes good business sense. Unlike assisted living, memory care, or skilled nursing where the impetus is primarily need-driven, for independent seniors, the choice is a discretionary one. Whatever the reason that these prospects have been avoiding or postponing such a move, the challenge for providers is twofold. They must not only offer an attractive and affordable product, but also frame and articulate a compelling value proposition.

It’s no secret the seniors housing industry today serves only a small fraction of older adults nationwide. NIC estimates only 12.6 percent of adults over age 80 reside in some type of senior living property, and that number declines to just 7.6 percent for those 75 years of age or older.7 In fact, the average age at which people move into independent living (IL) is now in their early- to mid-80s,1 (and even residents of most “55+”  communities are, in reality, more likely to be in their mid- to late-60s or older).4 In addition, the bulk of the existing independent and assisted living inventory, including life plan or continuing care retirement communities (CCRCs), caters to a demographic generally more affluent than the majority of older Americans, placing such options out of economic reach for most middle-class retirees.3

All of this suggests there is a substantial untapped market comprising older adults who either think they are too young for age-restricted housing, are unable to afford most suitable and available senior housing options, or both. There are also those who simply believe any type of seniors housing product is not something they would ever consider.

Thus, even the slightest drop in the average move-in age or in monthly rental cost could conceivably generate substantial benefits for operators looking to capture a slice of this growing demographic. Aside from tightening construction and operational budgets to help reduce rents, what else can be done to enhance the value proposition? In other words, what would it take to convince some of these prospects that living in an active adult community would make them happier than they already are?

For over a half century, social scientists and others have looked to Abraham Maslow’s hierarchy of needs model to explain human motivation and wellbeing. According to Maslow, people must, theoretically, satisfy fundamental imperatives such as food and shelter before pursuing more intangible forms of fulfilment such as love and esteem. He posited the pinnacle of human fulfilment is self-actualization, which seems an intrinsically internal and solitary attainment.

Research conducted for the 2011 World Happiness Report validated Maslow’s theory, with the qualifier that individuals can derive “subjective well-being” (or happiness) from satisfaction of certain psychosocial needs while still striving to satisfy more fundamental needs. This challenges the implicit dependent order of Maslow’s model. Particularly important are social relationships and “mastery”—the ability to perform instrumental tasks successfully and to grow by learning—in measuring happiness, even among people in otherwise impoverished circumstances.8

This conclusion, and in particular its applicability to older adults, was further underscored by the 2013 United States of Aging Survey, which found continued connection to friends and family is the primary determinant of quality of life for seniors in later years, even more so than financial security.6 Another insight came from a study finding that happiness for seniors is derived from ordinary experiences versus the extraordinary experiences younger people find gratifying.2 Researchers found that as people grow older and have a more acute sense of the limited amount of time they have left, they tend to place greater value on more ordinary everyday experiences than do younger people.

The study found that continued connection to friends and family is the primary determinant of quality of life for seniors in later years, even more so than financial security.

All this evidence suggests older adults, even those of limited means, derive the greatest happiness from living life among friends and/or family, engaging in social activities that some might regard as unremarkable or even mundane, so long as it provides pleasure and offers opportunities to exercise their skills and abilities in a safe, secure setting. Sounds simple enough, but how do you package and deliver this quality of life experience in an affordable active adult community setting?

Implications for Community Planning and Design

If the challenge is to engender a meaningful sense of wellbeing among residents who can’t afford resort-style living, where should developers and operators focus their energies and channel precious resources?

Based on what we have learned, we suggest there are five key areas within the built environment that warrant thoughtful attention to attract middle-income seniors who are content living on their own but are receptive to moving into an age-restricted community if it can make them demonstrably happier.

Gathering Space in the Unit

To make apartments and patio homes less costly to build, there has been enormous pressure to reduce square footage to the point that there often isn’t enough space in the living area for a regular table and chairs. While formal dining rooms went by the wayside long ago, older adults want to have friends and family over for meals or perhaps a card game. This is difficult to do if seated in a row at a kitchen counter or huddled around a coffee table in the living room. While it may seem counterintuitive and extravagant, space to reasonably accommodate a table surrounded by four to six chairs, and with a light source above, is a hugely valuable feature. Aside from the socialization benefit, the ability to have a place to assemble a jigsaw puzzle, do some sewing, or organize a collection could contribute significantly to resident enjoyment and fulfilment. 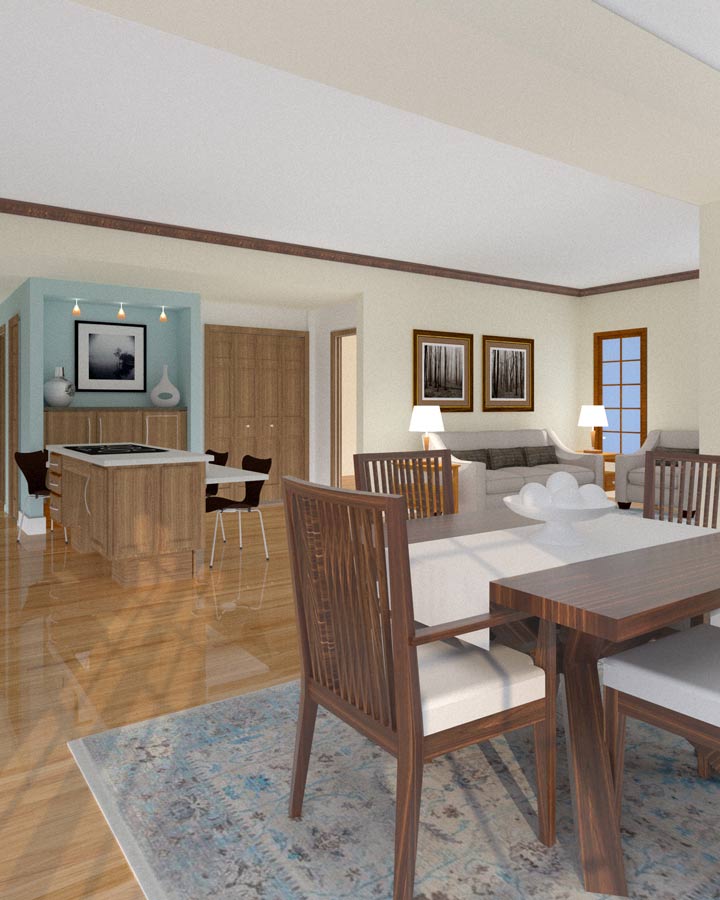 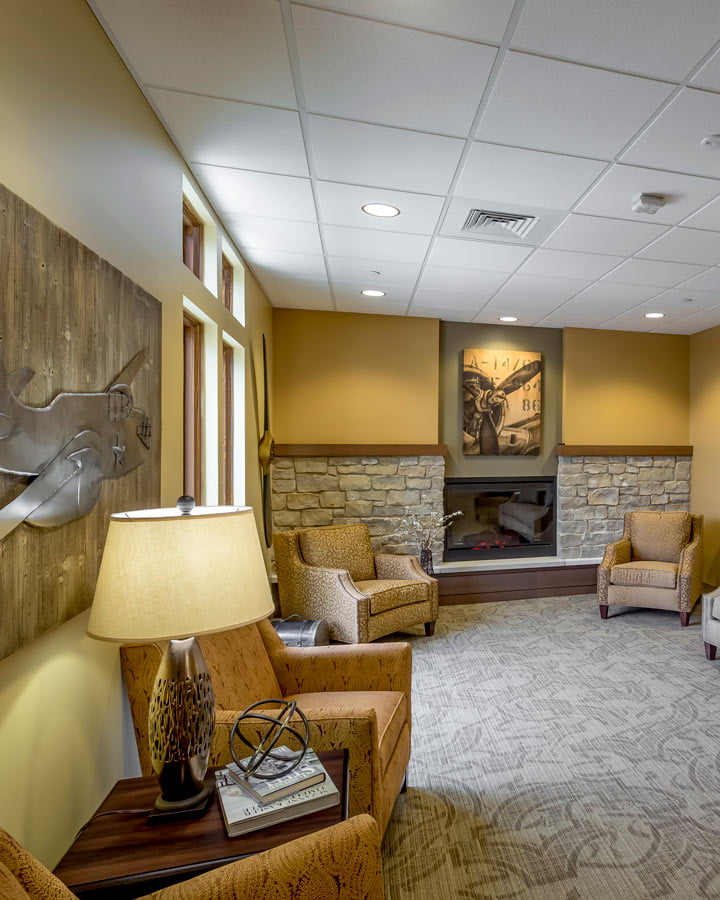 Gathering Space in a Clubhouse

When the group gets too big to gather in the unit, the ideal is to be able to walk over to a “main building” where a similar but more spacious amenity is situated. Here again, the key is to provide a space with ergonomic seating around an oblong table big enough for 8 to 12, but small enough to avoid straining to see or hear each other. A communal kitchen where meals can be re-heated and beverages kept cool is essential. Ample adjustable glare-free lighting and an acoustic design that allows for multiple conversations are also musts. Outdoor gathering spaces serve similar needs and provide wellness benefits and value-added access to nature. A variety of seating options, smooth and level walking surfaces, and handrails will address the comfort and mobility requirements typically encountered in an outdoor setting.

While communal food service is rarely provided in active adult communities, it is worth considering ways to facilitate access to a “third place” where residents can mingle and meet with a wider circle of contacts. We can all hum along to the theme from the TV show Cheers: “…where everybody knows your name, and they’re always glad you came…” In his landmark book The Great Good Place, author Ray Oldenburg extols the virtues of
“cafes, coffee shops, bookstores, bars, hair salons, and other hangouts” as essential to fostering and sustaining a meaningful sense of community, in addition to offering people a place to which they can escape from time to time. This “neutral ground” amenity may be offered on the premises or by a neighboring business that is easily walkable. 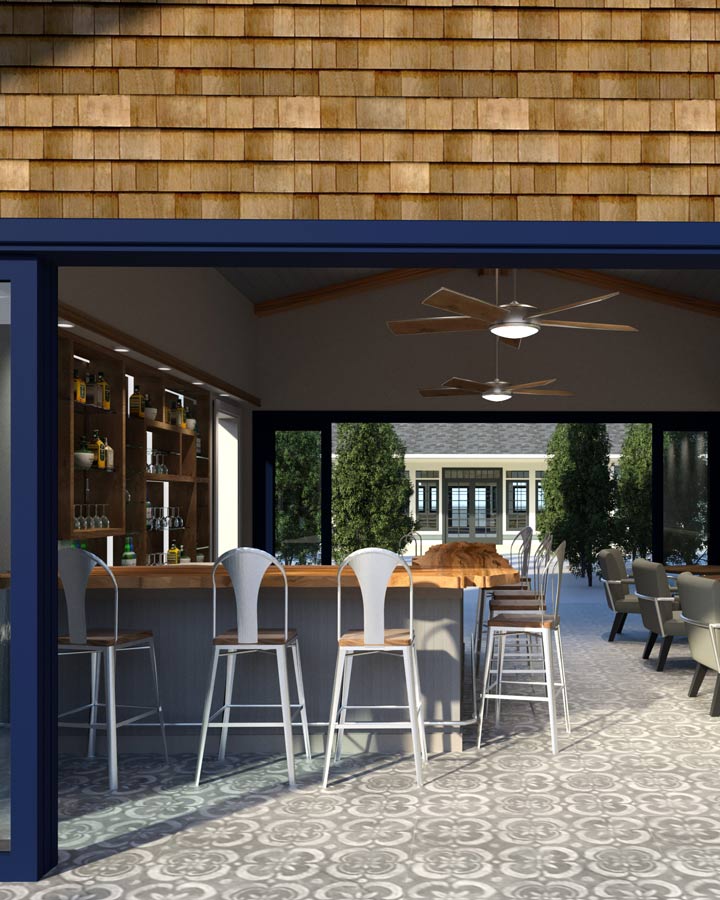 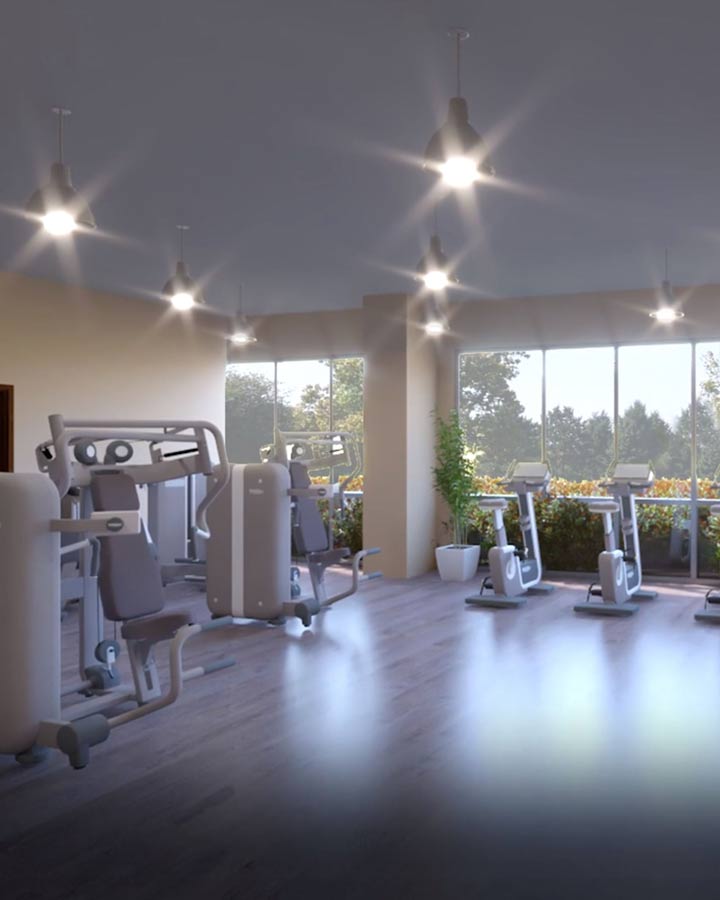 A well-equipped gym has become a “must” for most aging Baby Boomers. They are accustomed to having access to fitness spaces and view them as key to maintaining their health and wellness and to living independently as long as possible. Such a facility should include the customary complement of strength-training and aerobic machines, and space for small group exercise. Outdoor site design features can include walking and biking paths and mind-body activity spaces, while also providing access to nature. It can also offer access to a personal trainer, who might be a third party provider willing to contract for use of the space. This can be a heavy lift for some developers seeking to offer an attractive product at a moderate price point but remember, it is a huge selling point. If travel distance is not an issue, a mutually beneficial arrangement with a local YMCA or nearby fitness center can address this demand.

Forget movie theaters, computer labs, business centers, or libraries. Nowadays, most seniors have these at their fingertips in the comfort of their own units, assuming the “backbone” infrastructure necessary to support it is in place. When it comes to providing opportunities for your residents to find purpose, engage in lifelong learning, and experience cultural enrichment, a decent-sized, flexible community room can be an important asset. Having the ability to accommodate a resident theater troupe, host a lecturer, or bring in the local school choir, can be a competitive distinction for your community. It also promotes intergenerational activity and community awareness. Just as important is ensuring that a system is in place to keep it programmed, which might very well be orchestrated by the residents themselves. 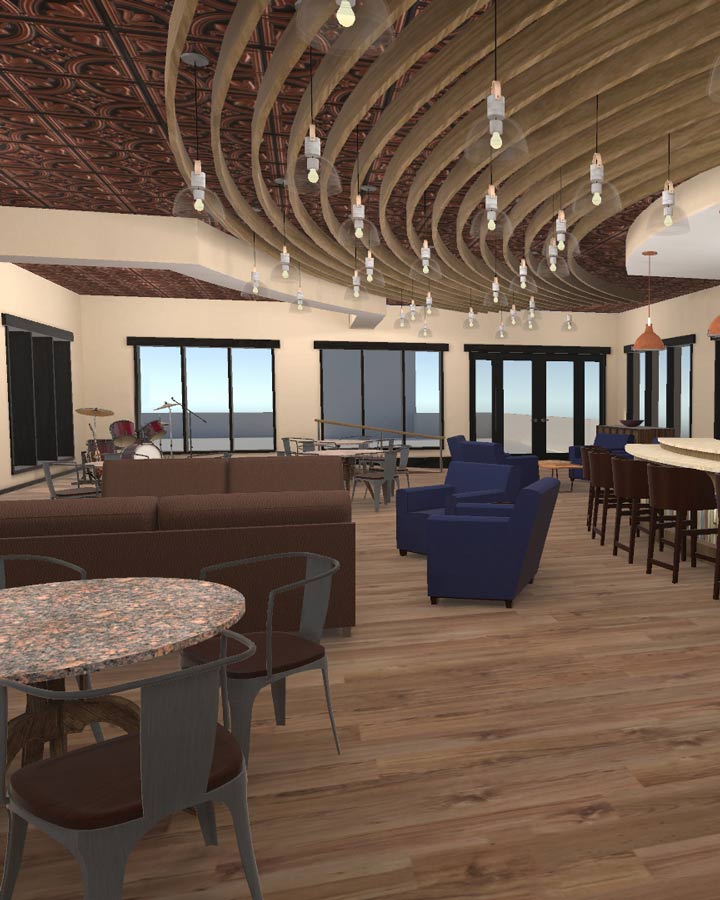 It's a Big Decision

For older adults interested in a more carefree lifestyle, but with limited options due to financial constraints, the thought of moving into any type of retirement community may seem prohibitive, and it’s easy to avoid making the decision until an event such as a fall or a stroke forces their hand. If developers and operators can persuade even a fraction of older adults that not only is a middle-market active adult community something they can actually afford, it provides what they feel is essential to their long-term happiness, they might just be willing to take that step. By keeping it simple—not spartan—with enough familiar character and comforts, as well as ample opportunities for meaningful socialization, relevant pursuits, and healthy living, developers can create a cost-effective yet engaging community environment that permits its residents to find happiness.

Sign up for our emails to get an exclusive first look at industry insights, insider news, the latest happenings at ERDMAN, and more!